…which segues into the next point.

Have you listened to what he’s said in any of his music? …well…of course you haven’t, it’s Young Thug…but that’s beside the point. Fact is, he perpetuates hella misogyny and homophobia in his music. Just check out the lyrics for his song “Serious“…that track, alone, is headache-inducing in the sheer volume of misogyny and homophobia. 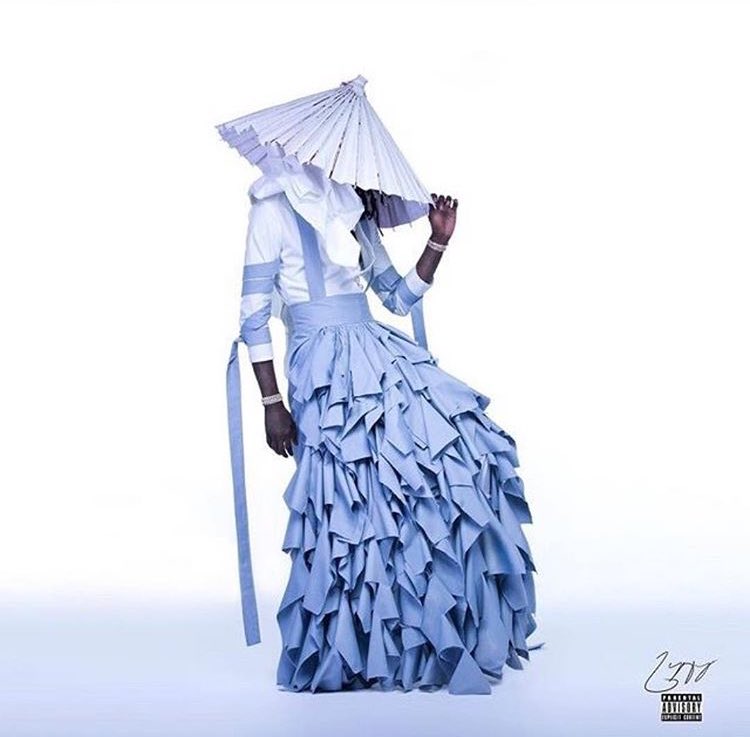 Look, don’t get me wrong…I’m absolutely here for cishet men breaking from the chains of toxic masculinity and expressing themselves authentically. The more we can break down the gender binary, the better off everyone is. But the reality is, that’s not what’s happening here. Young Thug has broken from masculinity as it relates to his wardrobe…and his wardrobe ONLY. He’s taken on and exploited a Queer aesthetic for what ultimately serves as a gimmick, which has helped him gain notoriety, while shamelessly throwing the LGBTQ community under the bus (again, to ensure that we know he’s straight). He also perpetuates a misogyny in his music that’s unfortunately typical of the men in hip-hop. He’s being lauded for going against toxic masculinity, despite the fact that he, aside from his wardrobe, continues to feed into said toxic masculinity in virtually every other way. Therefore, he’s allowed to maintain his autonomy to present himself the way that he does. Why, exactly is this cause for celebration for someone like me–and even more, so actual femme and gender non-conforming Queer men, who truly risk their lives just by being authentic, every day?

I’ve seen it mentioned that Young Thug, in his supposed breaking-down of gender, gives some people hope for the future. But reality is, if he’s truly the wave of the future, that just means homophobia is evolving into a far more insidious form…where cishet men feel comfortable enough to throw on a dress (+20 points) while still erasing, brutalizing and even killing Queer men to make sure everyone’s clear that them wearing said dress doesn’t make them “gay” (-2,000 points).

So, you’re “brave” enough to wear a dress, huh? Great! Now, what are you doing to break down the gender binary beyond that? Are you using your cisgender and straight privileges to help spread spotlight to the actual Black Queer and Gender Non-Conforming people, who innovated and conceptualized the very aesthetics that you’re now able to capitalize on? Are you helping to shine light on our plight and issues? Are you speaking out against misogyny, LGBTQ-phobia and toxic masculinity–all things that directly hamper the safety of the LGBTQ community? Are you even doing the introspective work of deconstructing the ways that you, yourself, contribute to the culture of toxic masculinity, which makes it so unsafe for so many Black Queer and Trans folks to live their lives authentically (his music lyrics make it pretty easy to answer this question…and perhaps all the other ones)? Reality is, being comfortable enough to wear a dress, while great, in and of itself, is remedial in the grand scheme of things.

On another note, this is also another instance where cishet people, in general, are able to capitalize on Queer aesthetics and femininity in a way that actual Queer and Gender Non-Conforming people aren’t allowed to. Queer Black men are relegated to the background and sidelines, where they feed cishet Black folks ideas (which will likely then be appropriated by white people…but that’s another topic for another day), dress them up and generally keep them on point, as they watch those cishet folks garner the spotlight (and revenue). Granted, the true root of this issue is white supremacist capitalism, which created that hierarchy in the first place, and we shouldn’t lose sight of this fact…it’s all trash, nonetheless.

I honestly do wanna be here for Young Thug, because there’s definitely positives to be gotten from his image, but I just can’t. I’m not impressed, and I won’t be impressed until an actual, out-and-proud Queer and/or Gender Non-Conforming person can capitalize on our own sub-community’s aesthetics the same way that appropriating cishet Black folks can…additionally, when cishet men can throw on a dress without feeling the need to throw the rest of us under the bus. Until that day happens, this is ultimately just another case of cishet people exerting their privilege by stepping on LGBTQ people, and I’m not here for it.